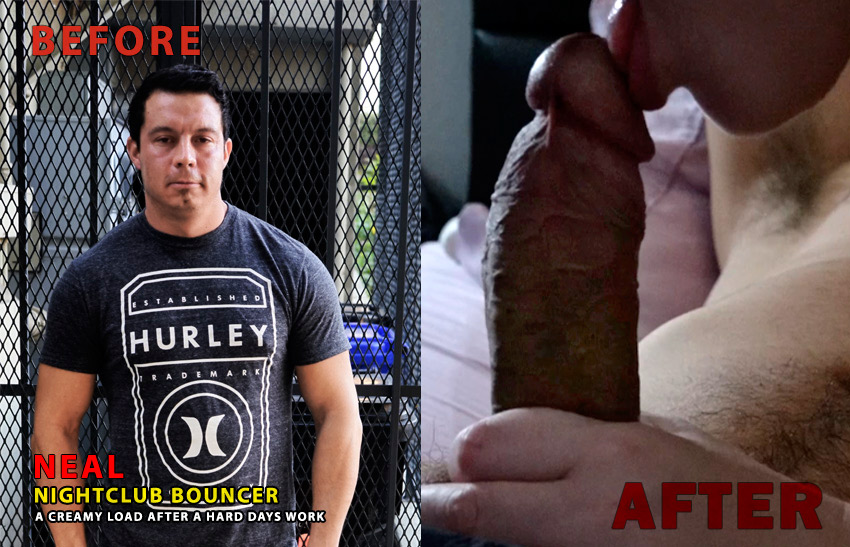 I was out at a local nightclub with my good friend, Darla, and as we walked in the door, the bouncer checked our ID’s. As he check my ID I checked his bulge HUNG!  Darla and I went inside and had our fun and during the night we hatched a plan on how she could be the bait so I could suck his cock tonight. It was getting towards closing time and we decided to head back to her place to hang out a bit more. I’d been eyeing the bouncers bulge all night. When we left the club, he was just getting ready to leave.

I couldn’t resist asking him back. Neal declined saying he was tired but Darla convinced him that it would be fun to hang/crash at her house. I played like I didn’t want to be a third wheel and offered to go home. Darla insisted that I come along.

When we got back to her place, Darla, being a stripper, knew how to ply him with tons of mixed alcohol, fairly quickly. Before we knew it Neal laid down on her bed and was out cold. Darla knew what was down and went in to take a shower while I felt him up and got him hard. I pulled out his cock, went down on him a bit, and came hard! I zipped him back up and went to chill in the living room.

Darla finished her shower and joined me in the living room. She thought Neal was hot and wanted part of the action too. I mentioned that I should film it, she agreed with an evil grin! I got the camera out of my trunk and it was game on. The rest of the story, and full video, are in the members area.